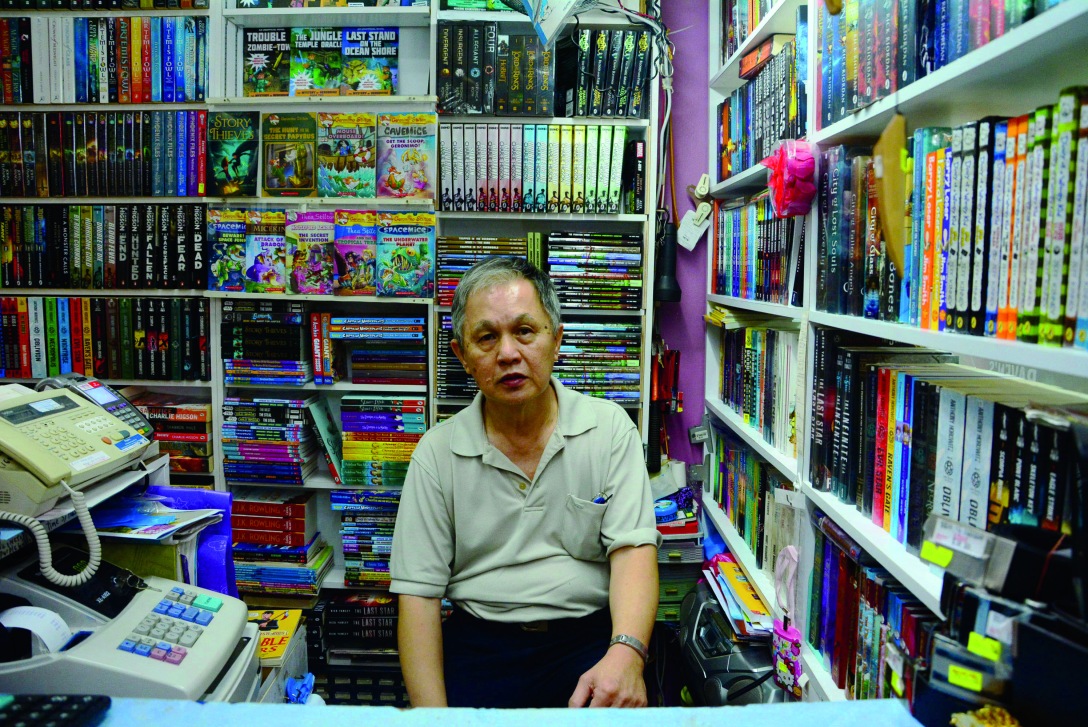 The voice of a prepubescent boy broke the silence. It was directed away from me and to the bookseller behind the counter, seated there since I entered.

Not that it was hard to eavesdrop since, at a modest 200 sq ft, the tiny secondhand bookstore was smaller than a kid’s room. Still, I looked up from the book I was admiring with my ears perked, hiding behind the ceiling-tall bookshelf that separated me from their exchange.

“Where’s the receipt?” The bookstore owner was probably referring to a “record of purchase” receipt that often comes accompanied with books rented at bookstores like the one I was standing in.

“Er – my friend tore it away, so it’s not there anymore.”

That’s suspicious. I don’t – should I say – buy it. My inner voice, unconcerned by the fact that it had no influence over the situation, nevertheless decided to comment.

“Huh? If you don’t have the receipt, then how do I know you bought it from me?” A gruff response from the older man, but not unkindly.

“But I bought it from here. It’s just that my friend threw the receipt away.”

Was that uncertainty I heard in the kid’s response? I held my breath for the outcome.

Uncle sighed. “You can’t do this, you know? Without the receipt, there isn’t any proof that you got it from here.”

But it was a resigned sigh because he gave the kid the benefit of the doubt anyway.

A few weeks ago, I learnt that where I stood, the Beauty World Book Centre would be closing for good by the end of the year. I was more flabbergasted that I didn’t know it existed, actually. Me? This proud bookworm whose identity is built upon owning books (and not reading them)? I had to pay a visit, and I wasted no time doing that.

It was as much as one might expect from a neighbourhood secondhand bookstore. Arriving at the entrance, I was hit by an inorganic nostalgia for the ’80s. The architecture was foreboding, the storefront illuminated by a cold grey light. On the metal shelves outside, I spotted children’s books on sale, a Vietnamese translation of a Lee Kuan Yew memoir, and a VCD set of My Fair Princess (a series as old as I am).

It wasn’t clear whether sales were great or restocking was slowing down, but the inside of the bookstore was sparser than old photos had led me to expect. While I would expect shelf space to be at a premium in the humble place, many of the shelves were now empty. I scoured every nook and cranny, one hand sifting through curiously-titled books (think “Life Management for Busy Women: Living Out God’s Plan with Passion and Purpose”) and the other navigating my trusty guide Goodreads.

After all, it’s important not to judge a book by its cover.

I like to think of secondhand bookstores as treasure islands. With established brick-and-mortars like Kinokuniya or their online counterparts like BookDepository, there’s no book you can’t have on-demand. But in Uncle’s humble store? You never know what awaits you.

You’ll find time-tested classics, regrettable relics (I saw one on the inevitable rise of Japan to defeat the US as World #1), and many texts promising you riches. In fact, you’ll find all sorts of things, except the books you’re actually looking for, as the following exchange between Uncle and me demonstrates:

“Hi Uncle, I’m looking for The Intelligent Investor.” (I finally made my way to him after ogling the shelves for an hour.)

“Anything by Peter Lynch?”

“Ah… no leh. I don’t recognise that name [Peter Lynch], though I do know [Robert Kiyosaki],” he spoke slowly, pointing to a copy of Rich Dad Poor Dad beside him. (Never underestimate the ability of secondhand bookstores to hold that classic, lol.) As we spoke, it began to dawn upon me that he might not have a complete record of all the books he had. He was operating using his memory rather than a machine.

As we spoke more, he shared that not all the books he stocks are secondhand books from customers. One source of “new” books is rejected copies from wholesalers – either those that failed quality checks or lay in the warehouse too long before yellowing. So the books would come with imperfections, but they would be a steal to the undemanding consumer.

I saw more popular reads on the same transparent display shelf – Thinking Fast and Slow, The Subtle Art of Not Giving A F*ck, and even Murakami. Noticing my gaze flitting toward the stack of new books behind him, he smiled and pointed to a certain What I Wish I Knew When I Was 20. “How about this? Good for someone young like you.” His polite surprise when I said I was older than that made me chuckle.

What drew me to the bookstore was a desire to capture that neighbourly connection I never had. I believe that everyone deserves a Friendly Book Uncle in their lives, just like we have a favourite hairdresser or caifan auntie. Considering how essential reading is (and the sheer number of people who read), it’s a pity how this intimate, collective connection is a rarity than the norm – not to mention one that is fading. For all the free books it offers, even the library is ultimately devoid of memory if it has no defining relationships that tie us to it.

My encounter with Uncle, minuscule in the grand scheme of things, was a tribute to this feeling I never knew and could only imagine. If I had known earlier about the Beauty World Book Centre, would I have gone there more to get books? Would I have made friends there? Would Uncle have known me, and would he have remembered me?

Would the bookstore have been more than a fleeting memory?

Determined to leave the place with a souvenir, I paid $7.50 in cash for a 400-page manual. Uncle was surprised that he had two copies of the book because I found both (and picked the nicer one). Before I walked out, he directed me to Kinokuniya to get the books I was looking for, which was cute.

I replied that I just wanted to support him.